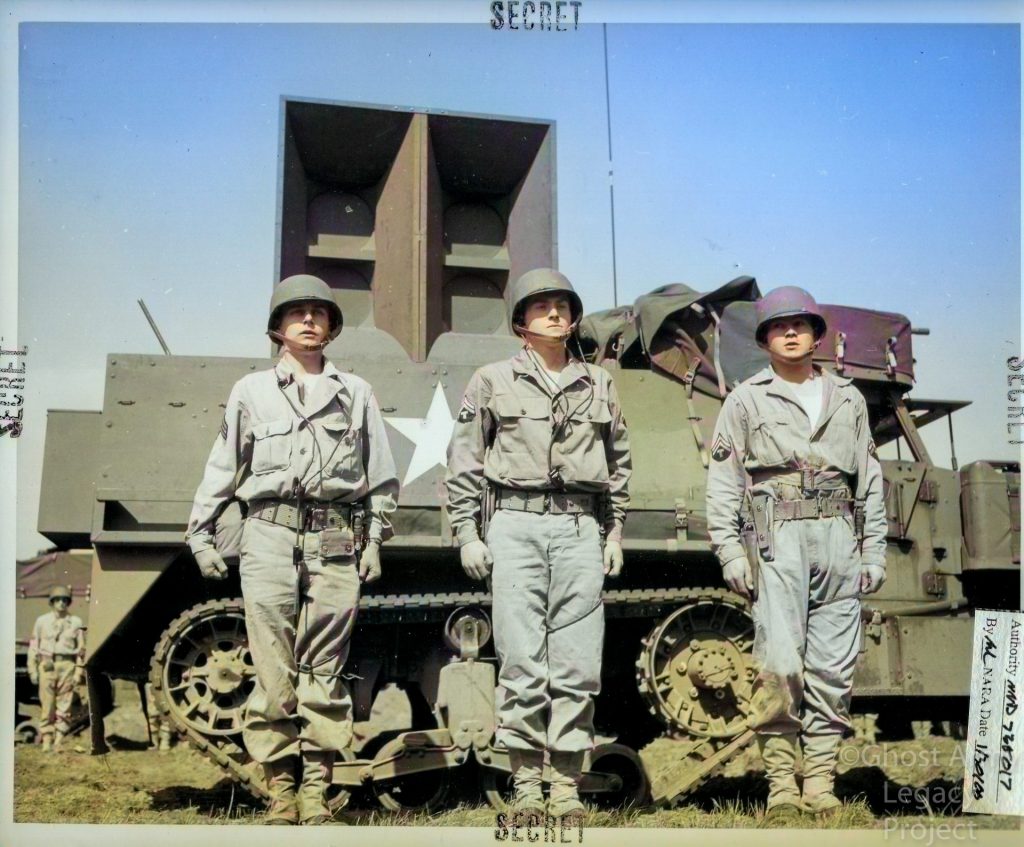 On February 1, 2022, President Biden signed the bill to award the Congressional Gold Medal to the WWII deception units known as The Ghost Army. We could not be prouder of Rick Beyer, the historian for our Ghost Army Tour, who worked tirelessly for seven years as the President of the Ghost Army Legacy Foundation to make sure these top secret WWII units received this long overdue honor.

“What an honor,” said 98-year-old Ghost Army veteran Bernie Bluestein, from his home in suburban Chicago. “I never in my lifetime expected anything like this, it completely blasts me. I’m just sorry that there are not more of my fellow soldiers still alive that can be enjoying this as much as I do.”

The medal goes to the 23rd Headquarters Special Troops and the 3133rd Signal Company Special.

The existence of the Ghost Army was top secret for more than 50 years until it was declassified in 1996. That’s when the public first learned of the creative, daring techniques the Ghost Army employed to fool and distract the enemy about the strength and location of American troops, including the use of inflatable tanks, sound effects, radio trickery and impersonation.

The 23rd Headquarters Special Troops carried out more than 20 deception missions, often dangerously close to the front, in France, Belgium, Luxembourg, and Germany. This “traveling road show of deception,” of only 1,100 troops appearing to be more than 20,000, are credited with saving an estimated 30,000 American lives. U.S. Army analyst Mark Kronman stated, “Rarely, if ever, has there been a group of such a few men which had so great an influence on the outcome of a major military campaign.”​ A sister unit the 3133rd Signal Company Special, carried out two deceptions in Italy in 1945.

There are just nine surviving Ghost Army veterans scattered throughout the U.S. that we are aware of, including:

“What made the Ghost Army special was not just their extraordinary courage, but their creativity,” said Rep. Annie Kuster (D-NH), the House sponsor of the bill, speaking on the floor of the House Wednesday. “Their story reminds us that listening to unconventional ideas, like using visual and sound deception, can help us solve existential challenges like defeating tyranny.”

“I am thrilled these deserving, brave and intrepid warriors of deception have at last been awarded this high honor,” said Ghost Army Legacy Project Rick Beyer president, who has worked for seven years to get this bill passed.  “Armed with their wits and guile these men saved lives and helped win the war. Their story is an inspiration to all of us!  So many have contributed to this moment — volunteers, members of the House and Senate from both parties, Ghost Army veterans and their families — with energy and devotion to seeing the valiant efforts of the Ghost Army properly honored.”

We have been heartened to see tremendous news coverage of the Ghost Army Congressional Gold Medal signing in the last few days. Here are three articles worth checking out :

It’s always good to be in The New York Times.

This very thorough story has many pics, including photos of most of the surviving Ghost Army veterans.

Join Rick on our upcoming Ghost Army Tour to learn more about these remarkable men. You will begin in England, where the top secret unit trained, before traveling on to Normandy, Brittany, Belgium and Luxembourg to study the key deception operations that were a pivotal part of the Allied victory.