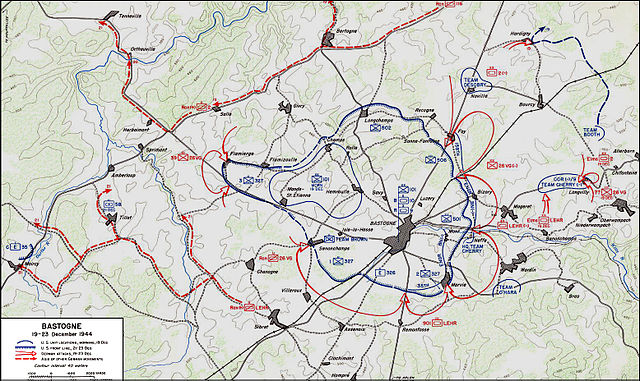 We are excited to announce historian Kevin Hymel’s upcoming webinar, “Defending Bastogne, the Battle of Noville: Against All Odds.” Kevin will discuss the details of the Battle of Noville and show how this brave, small force stymied an armored enemy force three times their size, in the freezing village of Noville, one of the stops on the D-Day to the Rhine Tour, the Band of Brothers Tour and the In Patton’s Footsteps tour. (Bastogne, Belgium Map; December 19-23, 1944. Credit: US Army Center for Military History)

Webinar: Defending Bastogne, the Battle of Noville: Against All Odds

What you will learn: During the battles for Bastogne, Belgium, during the German Ardennes Offensive in the winter of 1944, a reinforced battalion of 400 armored infantrymen, 15 Sherman tanks, and a handful of tank destroyers held off an entire German Panzer division on December 19, three miles north of Bastogne in the town of Noville. Under the command of Major Robert Desobry, these men fought in pea-soup-like fog to hold the small village from the advancing German Panther and Mark IV tanks. Desobry was preparing to pull back when paratroopers of Lieutenant Colonel James LaPrade 1st Battalion of the 506th Parachute Regiment marched into Noville and joined the fight. The successful defense of Noville prevented the Germans from smashing into Bastogne from the north. It also gave the 101st Airborne Division time to set up a perimeter around Bastogne, a perimeter that withstood everything the Germans could throw at it.

Register for the Battle of Noville: Against All Odds webinar>>