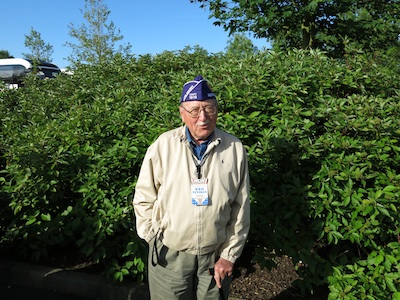 We were deeply saddened to learn that WWII veteran Mort Sheffloe recently passed away. We were honored to have Mort travel with us on both our D-Day to the Rhine Tour and In Patton’s Footsteps Tour. Everyone loved him. He was warm and engaging and a lot of fun to spend time with. 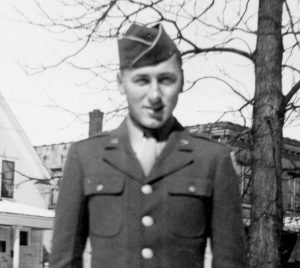 One day on the Patton tour, Sheffloe was escorted by several soldiers wearing American World War II-era uniforms to the barracks that once housed Brigadier General Anthony McAuliffe’s 101st Airborne Division during the Battle of the Bulge. Historian Kevin Hymel led this tour. As he recounts: “Some of the Americans who accompanied Sheffloe either teared up or openly cried at the outpouring of gratitude and respect the Belgian soldiers showed the American veteran. They had never seen anything like it.

“It was such a touching moment,” said Diane Ryder of Chagrin Halls, Ohio. “Even [my husband] Ed cried. He doesn’t do that very often.”

In 2017, historian Mark Bielski had the privilege to interview Mort over the course of several days while on the D-Day tour for his podcast, History with Mark Bielski. He shares a warm remembrance of his friend below.

We hope you’ll take a few minutes to listen to Mort himself share his WWII experiences at the very places where they happened and to read Kevin’s salute to Mort.

I am honored to write about my good friend, Mort Sheffloe. I first met Mort when we traveled in Normandy and retraced his steps while serving there in World War II.

Later, I had the privilege of getting together with Mort and his family when they visited New Orleans. All of the times that I had the pleasure of Mort’s company were special, but perhaps my fondest memories were in Normandy, sitting in cafés and listening to Mort speak of his time in action. Wherever we went, his vivid recollections had me spellbound.

I am very thankful that they are preserved in the recordings of my Podcasts with Mort. They are stories that will stay with me forever as I hope they will with everyone. Please share them with Mort and me.

God bless him, for he is eternally my friend.

In Normandy with WWII Vet Mort Sheffloe: Part I

Just a few summers ago Mark was traveling in France with a group of graduate students and WWII Veteran Mort Sheffloe. While walking the sands of Omaha Beach and Utah Beach, sitting in cafés in Normandy and dining in Paris, Mort shared his memories of the war as 19-year-old Sergeant Mortimer Sheffloe of Company E, 2nd Battalion, 121st Infantry Regiment, 8th Infantry Division, including his battles, serious wounding from a German sniper, and his recovery and return to the U.S.

Combat veteran Mort Sheffloe and Mark continue their discussion about his WWII experiences in Normandy and Brittany in 1944. Mort talks about Operation Cobra and being shot by a German sniper near Brest. He shares the personal story of his near fatal wounding, medical evacuation and recuperation. 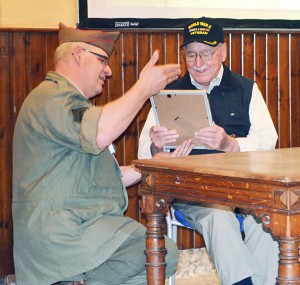 BASTOGNE, BELGIUM— When WWII Army veteran Mort Sheffloe of Georgetown, Texas, turned the corner at Bastogne barracks, he found a platoon of Belgian soldiers waiting. They stood at parade rest, then snapped to attention and saluted him. The salute caught Sheffloe off guard. He was holding his walking cane in his right hand and could not return the salute properly. Instead, he returned the salute with a wave of his cane, “like a sword salute,” he said. “Or like the Pope blessing the multitudes with Holy Water.” The soldiers broke into applause for the American who had put himself in harm’s way to help liberate Europe more than 70 years earlier.