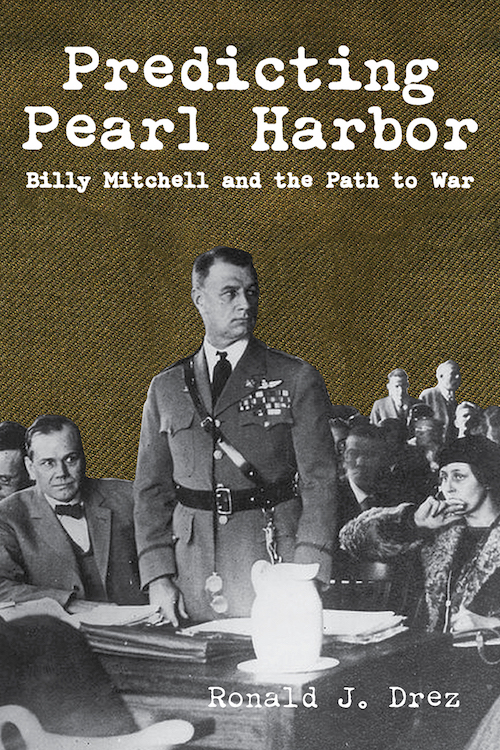 We are excited to announce that our historian Ronald Drez’s new book, Predicting Pearl Harbor, has just been released!

Ron’s tenth book, Predicting Pearl Harbor is a fascinating story about General Billy Mitchell, the father of the U.S. Air Force. He predicted the attack on Pearl Harbor in 1923!

While it’s common to say that the most predictable thing about the next war is its unpredictability, that wasn’t the case in the run-up to war with Japan. From Commodore Matthew Perry’s voyage into Japanese waters in 1853 to the attack on Pearl Harbor in 1941, the United States and Japan were on a collision course.

The saga is here brought to vivid life using primary-source documents, memoirs, and firsthand testimonies of those who lived during that era. It was Gen. Billy Mitchell who recognized the signs and foresaw the eventual showdown between the two nations twenty-eight years before the tragedy of Pearl Harbor, but his spot-on predictions were dismissed out of hand.

Discover one of the most exciting periods in American history through General Mitchell’s prescient reports, providing new insight into an ages-old conflict.

Anyone wishing to obtain a first edition signed copy can do so by e-mailing Ron at rdrez@aol.com. The cost is $29.95 plus shipping and handling and will arrive via priority mail.

Ronald Drez is an award-winning and best-selling author and historian. With Stephen Ambrose, he designed the original D-Day to the Rhine tour. Dr. Ambrose hand-picked Ron as his Eisenhower Center deputy to lead those tours, and to develop other tours like the Band of Brothers Tour and The Italian Campaign Tour. Ron is a decorated Marine combat veteran from the Vietnam War, was the first to encounter the now legendary Band of Brothers in 1988, and has interviewed over 4,000 WWII veterans, showcasing their stories in his many writings.

Interested in traveling with historian Ron Drez? Ron will be leading several dates of the following WWII tours in 2018. To quote one of our travelers, “Ron Drez was the history professor you wanted in college, but couldn’t get because his classes were always full. His stories are fascinating.”

Iwo Jima: War in the Pacific

D-Day to the Rhine Tour