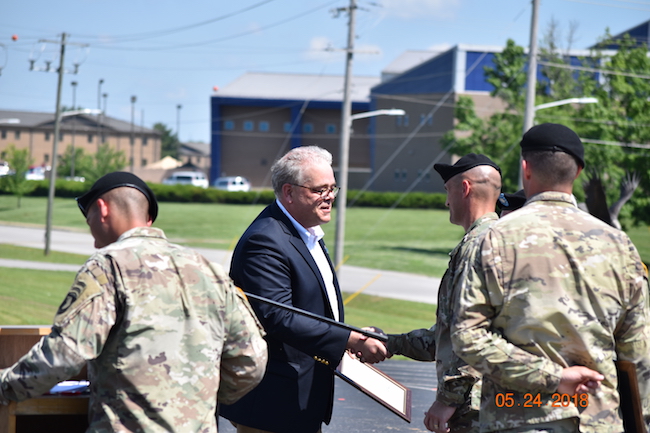 At a May 24, 2018 ceremony capping off the active duty 101st Airborne Division’s “Week of Eagles” festivities, Stephen Ambrose Historical Tours Senior Historian Christopher J. Anderson was recognized by the current 506th Infantry Regiment by being made an HMOR (Honorary Member of the Regiment).

Anderson was recognized for his 30-plus years of service to the regiment; bringing veterans of the 506th back to visit their old battlefields; leading tours of 506th sites for friends and families of the regiment; writing extensively about the history of the 506th and leading the effort to save the historic Aldbourne Stables and bring them to Toccoa, Georgia, where they became a centerpiece of the Toccoa Military Museum.

In the citation, Brigadier General Christopher T. Donahue, Chief of Infantry Branch, said the award was being given, “In the special interest of regimental continuity, tradition and esprit des corps.”

In formally welcoming Anderson into “Currahee Nation,” LTC Paul Witkowski, the commander of the 506th’s  1st Battalion, thanked Chris for his many, many years of service to the regiment and pointed out to the 506th  veterans, their families, friends from Toccoa and the active duty soldiers present that being made an HMOR is the highest recognition that the 506th can award. Since its founding in 1942 in Toccoa, only 72 civilians have been recognized as HMORs.

Colonel Robert Seitz, the outgoing Honorary Colonel of the regiment also thanked Anderson for his service in preserving the history of the 506th as he pinned Chris with his official HMOR regimental crest.

Afterward Anderson remarked that many years ago he was made an honorary member of Easy Company by the veterans of E/506 and to now be recognized by the current 506th was a very special honor. “To be recognized by the veterans and active duty soldiers of a regiment that has been such a huge part of my life is a very special honor indeed. Knowing that I’ve had a part to play in the preservation of the Currahee’s story is what keeps me doing what I do. I’m very much looking forward to this year’s tour season where I can tell the story to a whole new group of people.”