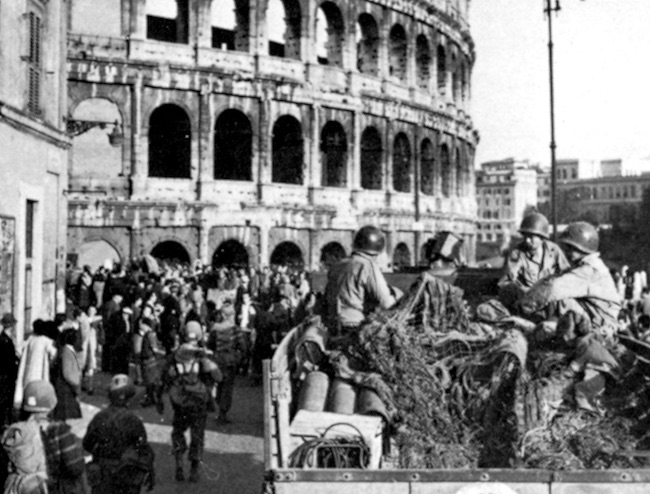 In June 1944, the D-Day Invasion of Normandy during World War II dominated the news. The massive Allied assault and thrust that would free western Europe from occupation by Nazi Germany began on the 6th  and seemed to upstage the hard-fought victories farther south in Europe.

Just two days earlier, General Mark Clark’s Fifth American army marched into Rome and liberated the Eternal City from the subjugation of the German army.  By taking Rome, he gave President Franklin Roosevelt the opportunity to publicly state that “the first Axis capital is in our hands.”  He quickly added gleefully, “One up and two to go!”

Anytime in the last two millennia when an army took Rome, it was major news throughout the world.  However, since the Allied victory in Italy happened right before D-Day, the story figuratively became relegated to “below the fold,” subservient to the stories of our soldiers storming the beaches in Normandy.

The Italian Campaign: Prelude to Normandy

When President Roosevelt and Prime Minister Winston Churchill met at Casablanca in January 1943, they agreed on a future invasion of northwestern Europe the following year.  After victory in North Africa the Allies could move on Europe.  First, they had to nullify Axis member Italy, Germany’s ally, and take control of the Mediterranean Sea.

The airborne assault began in July 1943 just as Churchill and Roosevelt jointly appealed to the Italian people to depose Il Duce, Benito Mussolini. He was out of power by the end of the month and Allied troops were landing at Reggio Calabria, the toe of the Italian boot, in September.  When the Italian army largely dissolved upon their country’s surrender, the German Wehrmacht moved quickly south with reinforced divisions and counter-attacked. Field Marshal Albert Kesselring conducted an effective campaign that put up stiff resistance to the American forces on the western side, and against General Bernard Montgomery’s men fighting their way up the eastern side.

Italy is mountainous, with the main Apennine range running down the middle like a spine and rivers flowing to either side to the Adriatic or Tyrrhenian seas.  The late autumn, winter and early spring rains and snow added to the misery as the armies slogged up the peninsula.  Even after hard-fought victories such as Anzio and Monte Cassino, the Germans would regroup and form new lines of resistance.  The Winter Line and the Gustav Line were two such defensive positions.

General Clark actually disobeyed orders when he moved on Rome. His forces were supposed to move east to the interior to block and capture the Germans who were in retreat. Instead he struck straight for Rome, which he felt was easily within reach.  Clark most likely sensed that the imminent Normandy operations would soon take the limelight.

The action in Italy during WWII was very real and of supreme importance to both the Allied operations in Northern Europe and to the men who had slogged their way up the boot and still had more fighting to do. Despite their heroism and accomplishments, some misperceptions arose.

At some time after the Battle of Normandy began, a rumor started to circulate that labeled the men fighting in Italy as the “D-Day Dodgers.”  There were those who attributed the quotation to an “ill-considered remark” by British Parliamentarian, Viscountess Nancy Astor, although she herself denied it.  There was, however, even a song written about the “D-Day Dodgers,” and on occasion the men would lightheartedly refer to themselves as such—even while bullets whizzed over their heads and shells exploded within their ranks.

One of the versions of the song catalogues the many battles the Allies fought along the way in Italy.  The lyrics are tongue-in-cheek and make light of the victories and struggles.  But then it gets serious and contains the verse:

We are the D-Day Dodgers, in Sunny Italy.

When you look ’round the mountains, through the mud and rain
You’ll find the crosses, some which bear no name.
Heartbreak, and toil and suffering gone
The boys beneath them slumber on
They were the D-Day Dodgers, who’ll stay in Italy

Indeed, testimony to the sacrifice made by the men who fought an uphill battle through the mountainous terrain of Italy is visible at the Sicily-Rome American Cemetery in Nettuno. There are 7,860 graves of Americans who died fighting in the liberation of Sicily, the landings in the Salerno area and at Anzio Beach.  There are an additional 3,095 names of the missing engraved on the marble walls of the chapel.

Once the Italian Campaign was complete, the victorious Allied soldiers would have the chance to “dodge” enemy fire again when they would land in southern France.

Travel on the Italian Campaign Tour

Learn more about this significant chapter in WWII history on our Italian Campaign Tour this October 6-19. As guest Fred Murray said of the tour, “The boot of Italy is a very tough place to get through even today with a car. We went to some places where most tours would normally not go. It turned out to be a winner. Everybody was very pleased with it. I’d do it again.”