Donald Richardson is a frequent traveler with Stephen Ambrose Historical Tours. George Luz, Jr., who is the son of Easy Company member, George Luz, often assists our historians on our Band of Brothers® Tour and other WWII tours. He first met Don during the 75th Anniversary of D-Day Tour. Both Rhode Islanders, George and Don have become friends. George has learned a lot about Don and his brother Victor, both of whom served in WWII. George shares their stories below.

Many of you who know Don Richardson understand his passion for family, history, community and his country.

At the end of WWII Don served with the 24th Infantry Division and was stationed in Japan on the island of Kumamoto from late in 1946 for about 18 months. Don’s brother, Victor C. “Guns” Richardson, served with the Third United States Army, 92nd Medical Gas Treatment Battalion Company A during World War II. Don, like many of our guests, wanted to see as closely as possible where his relative fought. His goal was to retrace his brother’s bootsteps. After Don provided some details and landmarks, Senior Historian Chris Anderson knew he could put Don where he needed to be.

Don has a great sense of adventure. Prior to the start of the 75th Anniversary of D-Day Tour, Don went on his own to a nearby RAF base and got a ride in a Tiger Moth. When Chris brought us on a tour at Brecourt Manor in Normandy, the site where Easy Company silenced the Nazi artillery, owner Charles de Vallavieille provided us with a toast of Calvados. Don said “I don’t drink but I tested it.” He recently went to California and visited his wife’s sister. While they were there they went to the Palm Springs Air Museum and took a ride in a C-47.

At 92 years young, Don retired after 62 years with the Bridge authority in Rhode Island. One of our local news channels, WJAR 10 in Providence, had a wonderful wrap up about Don’s career that can inspire all of us, no matter what age, that there is more ahead in life.

You can watch his interview here: Jamestown man collects his final toll after decades on the job

As I have gotten to know Don, I’ve also gotten to learn more about his brother. Below, is an article, “The Barn at Cobreville,” that was published in The Bulge Bugle in February 2004, written by Victor himself. He passed away on March 9, 2021. He may not have made it back to where he served during WWII, but his younger brother Don did for both of them.

The story begins when Army Medic Victor “Guns” Richardson was called from the Metz area France to go to Bastogne during the winter of 1944-1945.

It was a long cold motor march from Metz to the corridor leading into Bastogne. Somehow along the way the cooks and quartermasters had set up this Delicious Christmas dinner and it was all you could eat. I remember most is the mess sergeant say, “Do you want more Turkey?  Do you want more pie?  And lots of hot coffee”. You hardly ever heard a mess sergeant saying things like that-ever.

Finally, it was our turn to do down the hillside into the corridor which led to Bastogne. We set up in a little town called Cobreville outside of Bastogne. We set up in a barn with three big tents outside in the field. Next, we needed to set up a light trap which would hold the ambulance so we could unload the patients without leading any light for the enemy to see.  We had 3 operations stations as well as a shock litter on saw horses, draped with blankets and two lanterns underneath to hold the heat for sock victims.  Next, we need clean to sterilizing instruments.  We used the standard gasoline-fuel heaters normally used for washing mess kits and this was use to provide a continuous supply of sterile water.

We were waiting to see what was going to happen next when suddenly out of the dark of night an ambulance backed in the light trap and a load of walking wounded spilled out into our clearing station. The control post was set up to record all patient information. Our first attempt at this procedure was a failure however we became more experience, we were much better organized and the flow of was handled much smoother. Our first day we took in over 300 patients and the reason for that was there was such casualties had been accumulating for weeks in the besieged city of Bastogne. When we were just at about overflowing the ambulances began to arrive from field hospital to evacuate the wounded.  After an initial surge we finally reached a steady flow. We seemed to have an almost unlimited supply of plasma, blood and transfusions of whole blood which brought about miraculous results in some of the patients.

Occasionally German prisoners were brought in but the priority was always to aid the American casualties first and then the attention was given to the German prisoners. In one instance, when a wounded German prisoner stood up, his arms dropped and well over a pint of blood poured out of his overcoat sleeve. He had been sitting there quietly bleeding to death. He was attended and was sent still alive to a field hospital.

Again, in one of the ward tents, there was a paratrooper who had just bayoneted a German trooper in a one-on-one fight to the death. He had been sent back from the front lines because he was so upset and a nervous wreck. He seems compelled to tell the story of his battle as though he had to have someone to share this terrible experience with him. I was almost embarrassed to hear him bear his soul and yet feared that if I didn’t listen, he would go berserk.

On a happier note, a GI was brought in who looked like he wouldn’t last five minutes. He was in severe shock. We recently received an air shipment of whole blood which was only one day old. He was given a transfusion and within a short time it was like watching a miracle. When I asked the medical officer about this recovery, he said that sometimes this happens after a transfusion.  I remember the poem my Robert Service. “The Cremation of Sam Magee”. For truly this soldier “wore a smile you could see for a mile.

My sleeping quarters were in a hayloft in a stone barn next to the clearing station. Enemy artillery barrages at time seemed to be all around the clearing station although none of the shells came close to the medical station.  The sound of the American counter-battery fire artillery duels would sometime last for an hour.

The barn was built on a steep hillside and underneath was where the morgue was. The dead soldier would accumulate there until graves registration would come to identify and remove the bodies. The first trip to the morgue was a real shock, it was not too long before seeing dead soldier was just another part of the day’s work.

All things considered, everything worked and probably most of all the training of the medical people at all levels and event eh ever-boiling coffee pot for the wounded. The end result was that an effective and useful service was rendered.

Travel on the Battle of the Bulge Tour 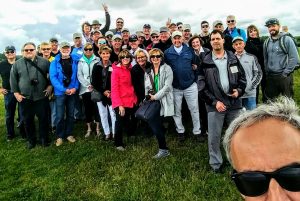 What most people recognize about the Battle of the Bulge is the 101st Airborne Division’s epic eight-day defense of Bastogne. As any veteran of the Ardennes would tell you, however, it was much more than that. The Battle of the Bulge was one of the most epic and decisive battles of World War II. In the largest American land battle of the war, the U.S. Army stopped Hitler’s well-equipped force of a half-million Germans and his final offensive in Western Europe. The victory would affect the lives of millions.

Join us December 10 – 18, 2022 as we travel from Brussels to the Ardennes, Malmedy, Bastogne, Diekirch on this epic tour!