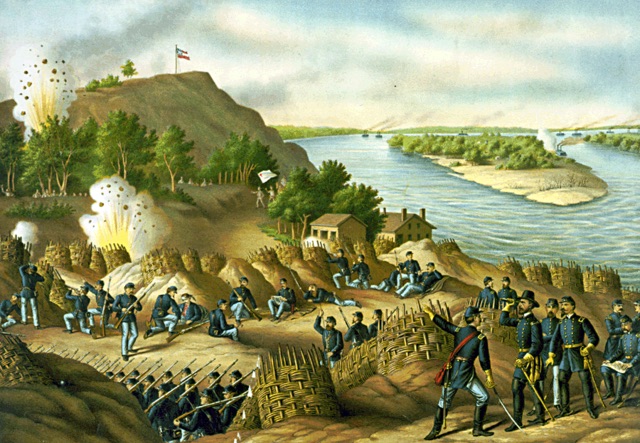 This week, historian Mark Bielski, who leads the Civil War: Mississippi River Campaign Tour, writes about one of the pivotal Civil War battles fought along the Mighty Mississippi: Vicksburg. The river was the major interstate highway of the nineteenth century America. It was also the strategic focal point of the Civil War. Whoever held the great river would control the continent. Without it, neither side could supply itself, so both the Confederates and the Federals made it a key aspect of overall strategy.

By the end of April 1862, New Orleans, the Confederacy’s largest and most important city, had fallen. This major international port and the South’s commercial center was now under Federal occupation and the mouth of the Mississippi River was closed. President Abraham Lincoln had emphasized the importance of control of the river. The Union must have it. Significantly, one rising star general, Ulysses S. Grant, shared his vision.

Perhaps too late, Jefferson Davis and his cabinet in Richmond saw that the only hope left with New Orleans and Memphis gone (surrendered in June 1862) was Vicksburg, the Mississippi town perched on the bluffs like a sentry overlooking the river. Confederate General John C. Pemberton must hold it. Grant would not be able to simply surround and invest the city with a siege. He would have to fight a series of battles with the protecting Confederate forces just to get close.

After bringing his army—miraculously undetected*—across the Mississippi at Bruinsburg, Grant faced a series of obstacles in grey. He and his army overcame each one. In successive clashes at Port Gibson, Raymond, Jackson, Champion Hill and Big Black River, the Union army was able to push the Confederate defenders back until they were bottled up behind the siege lines in Vicksburg itself.

Possibly the key battle was Champion Hill on May 16. While William Tecumseh Sherman’s men put the torch to the state capital of Jackson, and Union gunboats readied themselves to bombard Vicksburg from the river, Generals McClernand and McPherson launched an attack on the Confederates who had positioned themselves on a low ridge on the property of the Champion family. A series of attacks and flanking movements battered the Confederates who fell back to a point just ten miles east of Vicksburg, Big Black River. Again, the aggressiveness of the Union commanders caused the Confederate lines to break and they captured thousands of prisoners while suffering only slight casualties.

Yet the fighting spirit of the troops was never an issue. The Confederates were beset with internal strife in the senior echelon and this was deleterious to the essential element, unity of command. Pemberton was a Philadelphian with Quaker roots who had married into a southern family. He feuded with his subordinate, General Lloyd Tilghman, who had grown up on a plantation on the Eastern Shore of Maryland. Pemberton had Tilghman arrested for misuse of equipment and other rather weak charges. This incensed John Loring, Tilghman’s close friend, who threatened with insubordination. At the peak of the struggle, Loring’s Division was conspicuously late to the field.

The Confederates dejectedly withdrew into Vicksburg to regroup. In the first seventeen days of May 1863, Grant had won five battles and he was impatient to continue his streak. He ordered a massive assault on May 19. However, this time the blue-clad wave of soldiers ran into well-positioned artillery, a series of fortified trenches and rifle pits, and a Rebel army determined to repulse the Yankee attacks. The siege would continue until the Confederate surrender on 4 July 1863 after holding out for 43 days.

Citizens and soldiers alike had endured the summer heat, a contaminated water supply, starvation (rats became a delicacy) and constant bombardment until further resistance would be futile.

*How he achieved this clandestine crossing is part of the Civil War: Mississippi River Campaign Tour.

Mark’s ability to relate history in an engaging way coupled with his warmth and sense of humor, make him a favorite among our guests who have traveled with him.