Historian Kevin Hymel’s latest article for WWII History Magazine has been posted on  Warfare History Network ! In “The WW2 Paratrooper: First-Hand Accounts of the D-Day Invasion,” Kevin shares the personal stories of the American D-Day airborne jump, and the paratroopers that managed to pull victory from the jaws of defeat.

The WW2 Paratrooper: First-Hand Accounts of the D-Day Invasion

These are the personal stories of the American D-Day airborne jump, and the paratroopers that managed to pull victory from the jaws of defeat.

What was it like to be a WW2 paratrooper, parachuting into Normandy in the opening minutes of June 6, 1944—D-Day? Almost 1,000 C-47 transport planes delivered more than 13,000 paratroopers of the 82nd and 101st Airborne Divisions from the skies above northern France. Each plane carried up to 16 paratroopers, each weighed down with 125 to 150 pounds of gear.

When a plane neared its drop zone the pilot turned on a red light near the open back door. At the order “stand up, hook up, equipment check,” the paratroopers stood up, hooked their static lines to the anchor cable running down the length of the cabin, and checked the gear of the man in front of them. They then waited for the red light to turn green.

The following is a compilation of the experiences of more than 80 paratroopers who survived parachuting into Normandy, from the jump to the drop to the landing.

When the light flashed green the jumpmaster shouted “Go!” and the men pushed out the open door. Most men made it out without incident.

David Kenyon Webster, 101st Airborne Division: “I shuffled up, glancing down and stopped, dumbfounded. All I could see was water, miles and miles of water. But this was D-Day and nobody went back to England, and a lot of infantry riding in open barges seasick to the low-tide beaches were depending on us to draw the Germans off the causeways and gun batteries, and so … I grabbed both sides of the door and threw myself out.”

Elmo Bell, 82nd Airborne Division: “I turned to Zeitner to tell him that we were gaining altitude, and when I called his name, he went out the door. Well, realizing that my calling his name had triggered his jump, I jumped, too—and, of course, the rest of the stick followed me out.”

Burt Collier, 101st: “When the light came on I already had my head and part of me out of the plane, and then I was knocked out the door and gone.”

Travel on Our D-Day to the Rhine Tour! 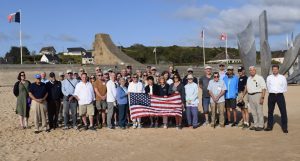 Want to hear more first-hand accounts about American paratroopers who landed behind enemy lines on D-Day? Book our D-Day to the Rhine Tour! Stephen Ambrose traveled with D-Day veterans to the battlefields of Normandy to record their wartime experiences. Their personal recollections and his research were the foundation of his book, “D-Day: June 6, 1944” and this D-Day Tour.

Our D-Day Tour is the most historically accurate D-Day Tour you can experience. We are the only tour company to tell the entire story of D-Day.

You will begin in England, where planning for this great undertaking occurred, cross the English Channel to Normandy and the beaches of Omaha and Utah, and then travel to Holland and Bastogne to see where the Americans rallied and stopped the massive German attack.

Our D-Day historians are experts in their field. Their interviews with hundreds of WWII veterans on the battlefields on which they fought give a personal dimension to our tour that no other company can offer.

Travel on the D-Day to the Rhine Tour >