This is an opportunity that comes to a commander not more than once in a century. We're about to destroy an entire hostile army and go all the way from here to the German border.

Stephen Ambrose Historical Tours historians of all WWII specialties will be gathering in France for the 2023 Historian Masterclass in April 2023. This year, the Masterclass will explore the Breakout at Normandy, code name Operation Cobra, the Allied plan to take Brittany and trap the remaining German army in Normandy.

By the evening of D-Day, more than 150,000 Allied troops had landed on the coast of France and had breached Adolf Hitler’s once impregnable “Atlantic Wall.” The war, however, was a long way from over. For the next 80-days the world fixated its eyes on the battles raging in Normandy. After almost five years of war, the Allies were poised to decide the fate of Adolf Hitler’s vaunted “1,000 Year Reich.”

On the 2023 Historians Masterclass, four historians will take guests from the D-Day beaches to the inland campaigns in the heart of Normandy. We will follow in the bootsteps of the American, British and Canadian armies where they fought for Caen and Cherbourg; stand with the GIs of the 30th Infantry Division where they stopped the last great German offensive in Normandy in its tracks; and see where Free Polish forces closed the German’s last avenue of escape at Falaise. We will then travel to Paris, following the path of the Allies as they raced to liberate the city.

Expect a boots-on-the-ground experience as historians share knowledge and collaborate with each other.

Guests will fly round trip through Paris. The four historians who will lecture throughout the tour will be announced soon. We will limit the guest count to about 25. The cost of this tour will reflect both the low guest count and the number of historians in attendance.

Guests travel independently to Paris on an overnight flight from the USA. If you would like to arrive early and have some extra nights in Paris, we can arrange your hotel for you.

DAY 2 Arrival and transfer to Normandy

Guests' flights should land around 10 a.m. so the tour bus can depart the Paris airport at noon. After a long day of travel, we will make a short visit to Pegasus Bridge before our Welcome Reception and Dinner.

Our focus will be on British airborne and commando battles around Ranville. While we will go over the details of Pegasus, the focus will be on the other airborne battles including: Mercville Battery, Ranville Breville and the first battles of 51st Highland Division and 7th Armoured Division.

After lunch, we will take up story of Sword Beach and Commando Landings, which will include stops at Queen Sector Sword Beach, 41 and 4 Commando, the drive on Caen, Morris, Hillman, and Rover Redoubts.

Today we will focus on the battles of the Canadians, beginning on Juno Beach. We will take in Courselles and the drive to Caen, Nan Beach and 48 Commando, Saint Aubin and 48 RM Commando, Battles around Caen against 12th SS, Destruction of the Black Watch at Verrieres Ridge, and Death of Panzer Ace Fritz Wittman.

In the afternoon we will focus on British armoured battles around Caen. Stops will include Operation Charnwood, Bras and Hubert Folie, Hills 112 and 113.

The whole day will be spent in a detailed look at Omaha Beach and surrounding battlefields. The intention will be to begin in the morning on Fox Beach sector and then work our way along the beach, stopping frequently to study stops along the way and finishing at the Vierville Draw. Any afternoon time left will take in German positions and battlefields just inland from Omaha. Stops would include Big Red One on Omaha, Dog Red Easy Red and St. Laurent sur Mere, Vierville Sur Mere and Point du Hoc.

We will begin the morning talking about U.S. Airborne landings and battlefields. Starting in St. Mere Eglise we will include visits to Graignes, Fight for the locks, Carentan Causeway, WXYZ, Bloody Gulch, Azeville, Grisbeq and Holdy batteries, La Fiere.

After studying the airborne landings/operations in the morning, in the afternoon we will take a detailed look at the Utah Landing Beaches and, time permitting, begin our drive to Cherbourg, taking in some of the early battles of 4th and 90th ID.

The focus today will be on the great struggle to cut off the Cherbourg Peninsula and secure the landing beaches. Stops will include 115th Infantry and the crossing of the Aure, Panzer Lehr’s counterattack, attack on hill 192 and attack into St. Lo.

In the afternoon we will talk about the great American breakout effort of Operation Cobra and the last German counterattack of the campaign. Our stops will include St. Giles and Coutances, Mortain attack and counterattack.

DAY 9 The Battles for Cherbourg and the arrival of Patton

We will finish up any leftovers from St. Lo and Mortain in the morning and then begin our drive to Cherbourg. Our stops will include the Drive to Barneville, Hill 158 and Osteck, Fort du Roue, and Cap de la Hague.

After taking out Cherbourg, remaining time will be spent studying activation of 3rd Army and the breakout of Coutances and into Brittany. There will also be a stop at the Brittany American cemetery.

DAY 10 Falaise and the End

In the morning, we will finish up some stops that have been missed earlier in the trip and then take in some of the armoured battles outside of Caen. The focus, however, will be to discuss the final battles in and around Falaise. Our stops will include: The Canadians at St. Lambert, The Poles on the Mace, The Americans at le Bourg St. Leonard, and the final link up at Chambois.

On the way to Paris, we could stop at La Roche Guyon to talk about the Germans/German High command. If we have more time in and around Paris, we could do stops along way taking in fights outside of Paris or do a talk/drive of Allied entry into Paris.

After breakfast, an airport transfer will be provided to the Paris Charles De Gaulle Airport (CDG).

This tour has a few site visits with long walks, including Point du Hoc and the American Cemeteries in Normandy and Brittney. You will also need to walk and balance on cobblestone streets, beaches and stairs.

Decision in Normandy by Carlo D'este

Beyond the Beachhead by Joe Balkoski

Breakout and Pursuit by Martin Blumenson

War Stories Volume 1: D-Day to the Liberation of Paris by Robert O' Babcock 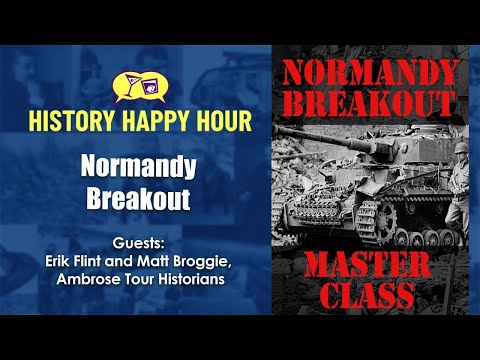 TOUR COST $6,200 per person based on double occupancy. If rooming alone, there will be a single occupancy supplement of $800.

There is 1 review for 'Historian Masterclass 2023: The Breakout'. Add your review

I was extremely fortunate to have been able to attend the first Masterclass tour last April. I am far from being a historian, so friends and family were astonished that I signed up to go on this tour but when I showed them the pictures of trees with “balls” in their branches (mistletoe), the breathtaking castle that was Rommel’s headquarters (code breaking room in the mountain) and then the story of Cyril as we visited his and his brothers grave – they understood.
Add in the interaction between the multiple historians on one tour which provided some great stories and laughs.
As you can tell I enjoyed everything about this tour – but what really stood out to me was the friendships our historians have with the local residents. Through their connections and professionalism we were able to see places and interact with people that normally would not have been available on a standard tour.