WWII: Drive to Victory in Europe

The British are not only grossly underestimating German strength in the Arnhem area, but they seem ignorant of the significance Arnhem has for the Fatherland.

We are excited to announce our exclusive new tour, WWII: Drive to Victory in Europe. Join us as we follow in the footsteps of the Allies as they marched through Europe, traveling from Paris to Arnhem, Bastogne, Luxembourg, Frankfurt, Nuremberg, Berchtesgaden, and Munich. Along the way, you will learn about some of the key events in WWII history that led to the defeat of the Nazis, including Operation Market Garden and the Battle of the Bulge.

The Drive to Victory in Europe in WWII

Operation Market Garden, launched in Holland in September 1944, was to be a major Allied thrust across the Rhine River. An advance into Germany with the ultimate goal of seizing Berlin would follow. The key, according to British General Bernard Montgomery, was an airborne strike that would pave the way for the massed ground troops. Success meant securing the major bridges and roads and then sweeping into Germany. As with many battle plans, the enemy had other ideas. We learn where and how the Allies punched and the Germans counter-punched to a standstill. Market Garden was a bold move that failed. The Allies were unable to establish positions across the Rhine, nor open the right flank of the Siegfried Line, nor bottle up the German army in Holland.

The Battle of the Bulge was a reversal of Market Garden. This was the biggest battle on Europe’s western front as well as the largest ever fought by the American Army. The outlook on the Eastern Front was grim for the Nazis. The Soviet Army was steadily advancing toward Germany and Hitler gambled that a surprise attack in the west could split the Allies and crush their morale. It had worked in 1940 when he conquered France, why not now?

In December of 1944, Hitler sent an initial attack force of more than 200,000 men against 80,000 Americans in the Ardennes forests of Belgium. In the ensuing weeks of fighting, there would be well over a million troops and three thousand tanks involved. At snowy Bastogne, the surrounded American commander, Gen. Anthony McAuliffe refused the German demand for surrender with one word, “Nuts.” When the situation looked most desperate, the Third Army under Gen. George S. Patton arrived with a relief force of three divisions and turned the tide of battle.

In Germany, we see the Rise and Fall of the Third Reich: Nuremberg, the scene of massive Nazi Party rallies in the 1930s, and later the war crime trials of the perpetrators of inhumanity across Europe. At Berchtesgaden, Hitler’s Alpine retreat in southeastern Bavaria, we see how he and his henchmen were able to live in luxury while they built an evil empire on the backs and blood of millions of innocent people.

Why Travel on WWII: Drive to Victory Tour?

Our WWII: Drive to Victory in Europe Tour is the second half of our outstanding D-Day to the Rhine Tour. The first half, Operation Overlord, covers the planning and execution of the D-Day invasion. The second half, Drive to Victory, focuses on the Allied march through Europe, and the defeat of Nazi Germany. This is an ideal tour for people who have traveled with us on our Operation Overlord Tour, and for those who have already experienced Normandy or are interested in Operation Market Garden and the Battle of the Bulge.

DAY 1 Fly to Paris or Brussels

Guest have a choice to start in Paris or in Brussels. Day 1 is the day that guests must fly independently to either city on an overnight flight landing on Day 2.

DAY 2  Arrive in Paris or Brussels

Paris- Guests land in Paris.There are no tour activities planned, however your room in Paris’ city center will be secured. Enjoy an evening on your own.

Brussels- Guests land in Brussels. There are no tour activities planed, however your room at a hotel near the Brussels-Midi train station will be secured; there is no airport transfer. Enjoy an evening on your own.

Paris - Meet the tour group for an early morning shuttle ride to the Paris train station. Take the fast train to Brussels for your first full day of touring.

Brussels - Meet the tour bus driver in hotel lobby before picking up the incoming group at train station.

Once all guests are together, we will begin our study of Operation Market Garden, the early attempt by the Allied forces to strike directly for Berlin. Control of the bridges at Eindhoven, Nijmegen and Arnhem was essential for the push into Germany. We drive “Hell’s Highway” where the 101st and 82nd Airborne broke through to connect with the British in Arnhem. We visit Nijmegen to see the daring crossing of the Waal River by the 82nd Airborne. From there we proceed to Arnhem where again we cross the “Bridge Too Far.”

Our historian will recount the desperate three days that the British 1st Airborne under General John Frost held it. Afterwards, we finish at the Airborne Museum at Oosterbeek.

This is where Hitler put everything he had into his only counter-attack. On December 16, 1944, Lt. Lyle Bouck was one of the first people to see the German columns coming on. We’ll make our first stop in the Ardennes at Lanzereth, the town where Bouck and a platoon of 19 men held off a full strength German SS Battalion under the infamous Joachim Peiper for an entire day. We’ll visit the American positions and hear their story, a breathtaking tale of heroism.

On December 17, 1944, the second day of the offensive, the Germans had several breakthroughs and many Americans surrendered near the town of Malmedy. Outside the town, Peiper’s SS lined up about 150 GIs and fired at them point blank. Less than half escaped alive. We will view the site of the massacre and the American Memorial at Malmedy. From there, we have a scenic drive through the Ardennes Mountains to our evening lodging.

We’ll drive to Bastogne where the Americans rallied and stopped the German attack. Here we’ll view the route of the initial American retreat and the place where the 101st Airborne and elements of the 10th Armored held off 15 German divisions for six days. Our group will visit key sites in and around this historic crossroads town. We’ll also go to General McAuliffe’s HQ where he replied to German surrender demands with one word: “NUTS.” After our visit, it’s a short ride to Luxembourg. This afternoon affords some relaxing free time in the center of this bustling but charming old world city.

We drive to nearby Hamm and the American cemetery and the site of General George Patton’s grave. America’s foremost WWII field general rests here among his men.

We’ll drive to the Siegfried Line to see remnants of the German communication trenches, pillboxes and dragon’s teeth that American GI’s fought so hard to take in late 1944. This evening we gather for a farewell dinner and discussion after an enriching campaign into history

We continue our journey toward the Bavarian Alps, stopping first in the historic city of Nuremberg, where Hitler staged his infamous Nazi rallies and the International Tribunal conducted the Nuremberg Trials. After lunch in the picturesque market center dominated by the Frauenkirche, we will tour the Nazi Party Rally Grounds and visit the Nuremberg Trials Courtroom 600.

We continue south through Bavaria toward Munich, first stopping to visit Dachau, site of some of the most nefarious acts against humankind during the war. In total, over 200,000 prisoners from more than 30 countries were confined in Dachau: notably Jews, resistance fighters, clergymen, politicians, communists, writers, artists and royalty. The second camp liberated by Anglo-American forces, Dachau was one of the first places where the West was exposed to Nazi brutality. After lunch in a traditional Munich restaurant, we’ll enjoy a city tour of Munich before checking-into a hotel in the heart of Munich, our base for our final two days.

The day includes a city tour of Berchtesgaden and Obersalzberg where we will visit the Eagle’s Nest and the remains of the vast Nazi Party complex liberated by the Allies in May 1945. Eagle’s Nest was built as a 50th birthday present to Hitler from the Nazi Party. Perched at 6017 feet, the complex and road network leading to it were considered feats of engineering genius as they were completed in only 13 months in 1937-1938. For our final night, we will reflect on our journey and enjoy the camaraderie of a farewell dinner. 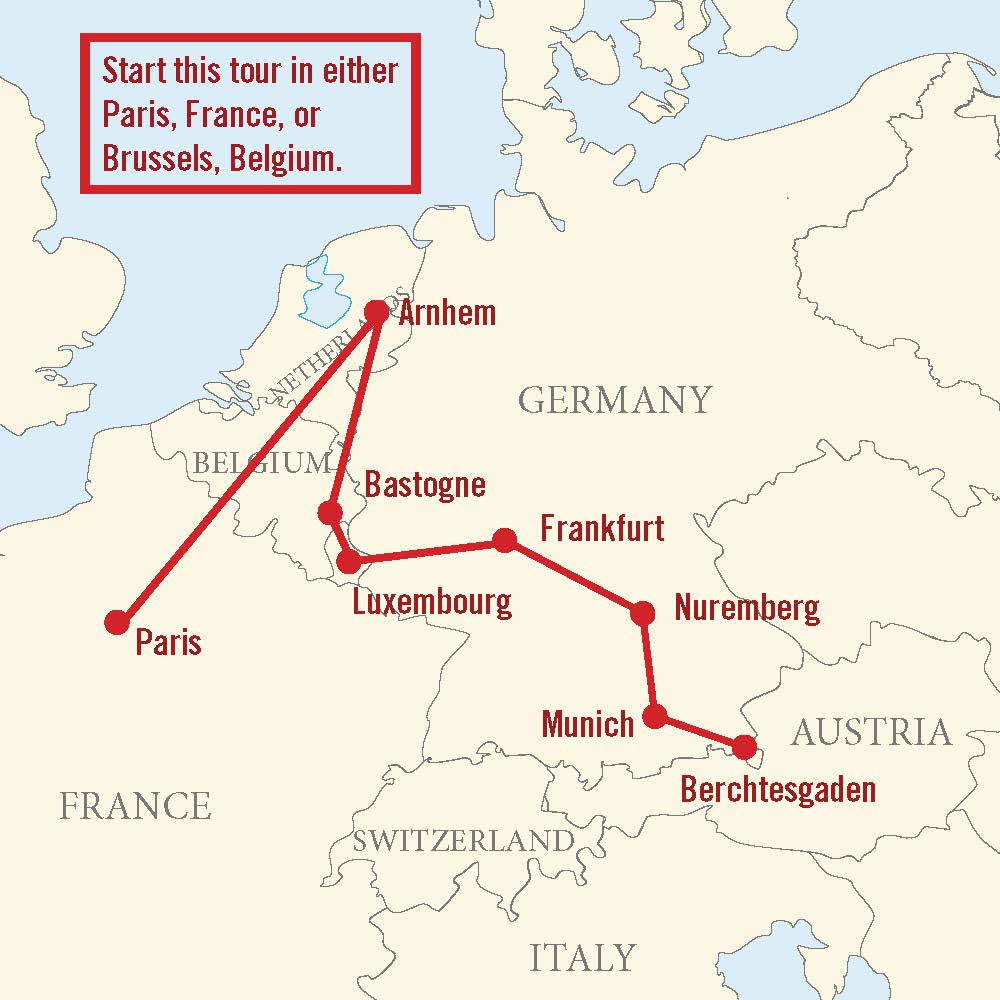 Prices are per person based on double occupancy. If rooming alone, there will be a single occupancy supplement of $1,000.