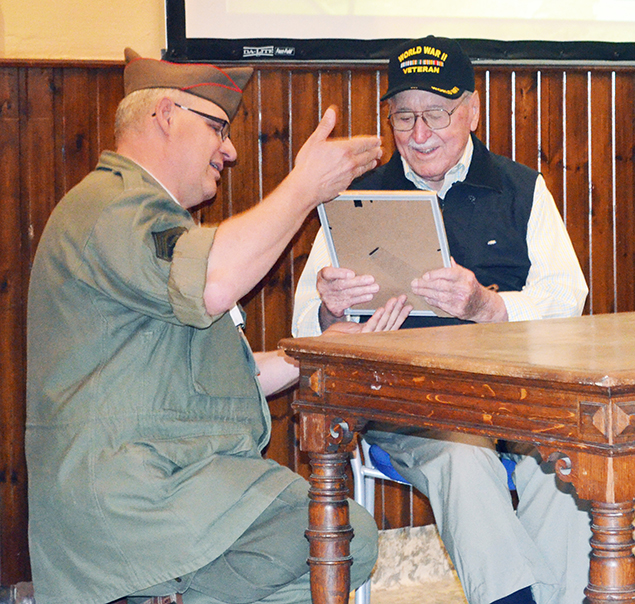 BASTOGNE, BELGIUM— When WWII Army veteran Mort Sheffloe of Georgetown, Texas, turned the corner at Bastogne barracks, he found a platoon of Belgian soldiers waiting. They stood at parade rest, then snapped to attention and saluted him. The salute caught Sheffloe off guard. He was holding his walking cane in his right hand and could not return the salute properly. Instead, he returned the salute with a wave of his cane, “like a sword salute,” he said. “Or like the Pope blessing the multitudes with Holy Water.” The soldiers broke into applause for the American who had put himself in harm’s way to help liberate Europe more than 70 years earlier.

Sheffloe was escorted by several soldiers wearing American World War II-era uniforms to the barracks that once housed Brigadier General Anthony McAuliffe’s 101st Airborne Division during the Battle of the Bulge. The garrison commander, Captain-Commandant Johnny Bona, formally thanked Sheffloe for his service.

“In the excitement of the presentation I can’t recall what the speaker said,” recalled Sheffloe, “but I’m sure it was a thank you to me and all Americans, especially those who fought through the dark days of the Bulge.”

Sheffloe was part of a Stephen Ambrose Historical Tours group that was following General George S. Patton Jr.’s battlefields across Europe. The 12 other American tourists and history enthusiasts were invited into the barracks to accompany Sheffloe. The Belgians had set up chairs, a podium, a map of the battlefield and a seat and table of honor for Sheffloe. Behind him hung an American flag and an image of Brigadier General McAuliffe’s headquarters. The room was appropriately named “Liberty Hall.”

Captain-Commandant Bona spoke of the sacrifice another generation of Americans made to free Belgium of Nazi tyranny, twice, and the Belgian people’s continued gratitude for their freedom. When he finished, a Belgian soldier, clad in the uniform of a 101st Airborne paratrooper, presented Sheffloe with a framed copy of General McAuliffe’s Christmas message to the troops that praised their fighting spirit and told them his response to a German surrender request: “Nuts!”

Some of the Americans who accompanied Sheffloe either teared up or openly cried at the outpouring of gratitude and respect the Belgian soldiers showed the American veteran. They had never seen anything like it.
“It was such a touching moment,” said Diane Ryder of Chagrin Halls, Ohio. “Even [my husband] Ed cried. He doesn’t do that very often.”

Although Sheffloe never fought in the area, the Belgians consider all American veterans deserving in gratitude for their country’s liberty. During World War II, then-Sergeant Sheffloe fought with the American 8th Infantry Division’s 121st Infantry Regiment until a German sniper bullet ripped through his chest outside of Brest, France, on September 10, 1944. Medics rushed him off the battlefield and he spent the rest of the war recovering in a British hospital.

When the ceremony ended, Sheffloe signed the post’s Book of Honor and went to General McAuliffe’s headquarters, which has been restored to its World War II status, complete with mannequins dressed in period uniforms, radio equipment and other souvenirs of the battlefield. From there he climbed back on the tour bus to visit more battlefields where his comrades had battled the Germans for the freedom of Europe.
The salute truly surprised Sheffloe.

“I was overwhelmed at first and then started to enjoy the attention,” he later admitted. “As an enlisted man in the Army, [I] didn’t receive salutes so it was a new experience and I hope I handled it with some amount of dignity and gratitude.”

The presentation, and the entire tour, had a profound effect on Sheffloe: “I was honored to be a part of that Barracks ceremony, as well as the respect shown me at other venues from Utah Beach, the Cemetery at Omaha, Mortain and Mont Ormel.”

The young Belgian soldiers who met an American liberator will long remember the experience, too.