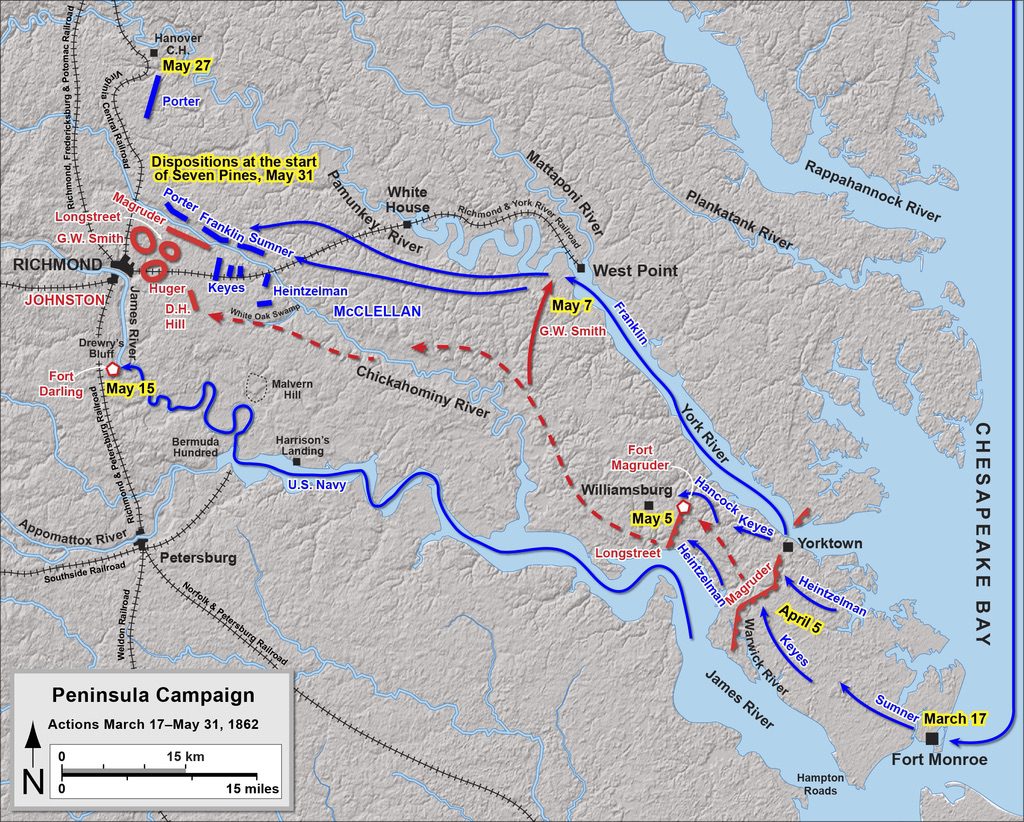 29-31 March – With his cabinet divided over whether to keep or relinquish control of Fort Sumter, SC, President Lincoln made a unilateral decision. On Sunday 31 March, he decided to send a resupply expedition to relieve the garrison.

The U.S. Federal government retained possession of Fort Sumter after South Carolina seceded in December 1860. President Lincoln took office in March 1861 and knew the fort needed supplies. If he sent arms, it may spur aggression from the South Carolina militia. An evacuation signified surrender, but if he just sent provisions such as food and medicine, it would buy time for a compromise. Lincoln’s thinking exemplified a sound political tactic: if the Southerners fired upon the supply ship, it would appear that the Confederates had started the war.

Beginning on St. Patrick’s Day 17 March, General George B. McClellan began moving his army, replete with men, wagons, horses and mules, artillery and supplies down the Potomac River from Alexandria, VA. His route was to the Chesapeake Bay and ultimately landing on the Virginia Peninsula to begin a move toward Richmond. It was the largest amphibious operation in North American history.

The Peninsula Campaign evolved into a series of battles in which McClellan’s numerically superior forces steadily pushed the Confederates northwest up the Peninsula toward Richmond (see map). After two months of fighting and with their backs against the capital, Confederate commander, General Joseph E. Johnston fell seriously wounded at the Battle of Seven Pines on 31 May. The following day, Jefferson Davis put his chief military adviser, Robert E. Lee in command of the Army of Northern Virginia. Lee staged a series of aggressive engagements at the end of June known as the Seven Days Battles, culminating with Malvern Hill on 1 July. With Union morale flagging, a dispirited McClellan withdrew his army back to Washington under orders from President Lincoln.

Mid-late March – General William Tecumseh Sherman’s Steele Bayou Expedition was a combined attack on the Confederate north flank of Vicksburg, MS with infantry and gunboats. It slogged to an end after fighting through swamps, marshes, creeks, thickets, harassment by Confederate sharpshooters and sporadic attacks. This failure caused General Grant to reconsider his strategy for the capture of Vicksburg and his goal of gaining control of the Mississippi River.

March – The Battle of Verdun fought from 21 February to 18 December 1916 was one of the largest and longest battles of the First World War on the Western Front between the German and French armies. By March 6, 1916 20 1⁄2 French divisions were in the RFV and a more extensive defense in depth had been constructed. Pétain ordered that On ne passe pas (no withdrawals) were to be made and that counter-attacks were to be conducted, despite exposing French infantry to fire from the German artillery. By 29 March, French artillery on the west bank had begun a constant bombardment of German positions on the east bank, which caused many German infantry casualties. The German offensive was extended to the left (west) bank of the Meuse, to gain observation of the ground from which French artillery had been firing over the river onto the Meuse Heights. The Germans were able to advance at first but French reinforcements contained the attacks short of their objectives.

03 March – The Treaty of Brest-Litovsk was signed between Russia and Germany after two months of negotiations. The treaty was forced on the Bolshevik government by the threat of further advances by German and Austrian forces. In the treaty, Bolshevik Russia ceded the Baltic States to Germany; they were meant to become German vassal states under German princelings. Russia also ceded its province of Kars Oblast in the South Caucasus to the Ottoman Empire and recognized the independence of Ukraine. Furthermore, Russia agreed to pay six billion German gold marks in reparations.

26 March – Marshall Foch was appointed Allied Commander on the Western Front. The decision to transfer overall command to Foch was taken by Allied government representatives at Doullens on 26 March (and formally confirmed on 3 April) in the wake of the onset of the powerful German Spring Offensive which was launched five days earlier and which inflicted serious reverses upon the British Army. It was thus in a period of crisis that Foch was handed his (ultimately highly successful) leading role.

30 March – The U.S. Coast Guard boarded and commandeered 27 Italian naval ships in several American ports. The move was to prevent the sailors from sabotaging their own ships so the Allies could not use them against the Axis.

3 April – The Prime Minister of Hungary, Count Pal Teleki, committed suicide by shooting himself when he learned that the German army had entered his country. He wrote that his country had broken his word “out of cowardice” and has “thrown away its honor” in giving in to German demands about invading Yugoslavia and using Hungarian territory as a future staging ground.

Late March – The British Labor Party had been supporting post-war independence for India, citing the millions of Indians fighting in the Allied armies. The people of the subcontinent could expect self-government as a reward for their sacrifice and service. Winston Churchill had been steadfast in his support for maintaining the British Empire and keeping India as a colony.

The Indian freedom movement actually began in the mid-eighteenth century and festered with occasional eruptions until the realization of independence in 1947. However, parts of India had been subject to European colonization since the 1400’s. The Portuguese had established the Casa da India, basically a management group to control commercial interests that served the royal house in Lisbon. The Dutch, British and French were to follow. Indian nationalism surfaced and became a powerful movement in the twentieth century, bolstered by the service of millions of men in WWI and WWII. The movement’s strength came partly from a combination of voices-soldiers who had fought for the British Commonwealth, the civil disobedience philosophy, and call for self-rule by Mohandas Gandhi and his followers.

The friction between the Hindu majority and Muslim minority (the other minorities of Sikhs, Christians, Buddhists and Jains also were part of the equation) proved to be a dilemma and led to the partition of British India into the countries of India and Pakistan (East and West). British Governor General, Lord Mountbatten, made the announcement in August 1947. The division was largely driven by religion, but the cultural, linguistic and ethnic differences between eastern Bengali and western Urdu—not to mention economic exploitation of the Bengalis and a geographical distance of 1,000 miles—led to a war for separation and the independence of Bangladesh.

13 March – In a plot called Operation Flash planned by Maj. Gen. Henning von Tresckow, a member of Gen. Fedor von Bock’s Army Group Center, Hitler was planning to fly back to the Wolf’s Lair in East Prussia (now Poland) from Vinnitsa, in the USSR. A stopover was planned at Smolensk, during which the Fuhrer was to be handed a parcel bomb by an unwitting officer thinking it was a gift of liquor for two senior officers at the Wolf’s Lair. All went according to plan and Hitler’s plane took off-—the bomb was set to go off somewhere over Minsk. At that point, co-conspirators in Berlin were ready to take control of the central government at the mention of the code word “Flash.” Unfortunately, the bomb never went off at all—the detonator was defective. (credit: History Channel)

21 March – A week later on Heroes’ Memorial Day, (a holiday honoring German WWI dead), Tresckow selected Col. Freiherr von Gersdorff to act as a suicide bomber at the Zeughaus Museum in Berlin, where Hitler was to attend the annual memorial dedication. With a bomb planted in each of his two coat pockets, Gersdorff was to sidle up to Hitler as he reviewed the memorials and ignite the bombs, taking the dictator out—along with himself and everyone in the immediate vicinity. Schlabrendorff supplied Gersdorff with bombs—each with a 10-minute fuse.

Once at the exhibition hall, Gersdorff was informed that the Fuhrer was to inspect the exhibits for only eight minutes—not enough time for the fuses to melt down. (credit: History Channel)