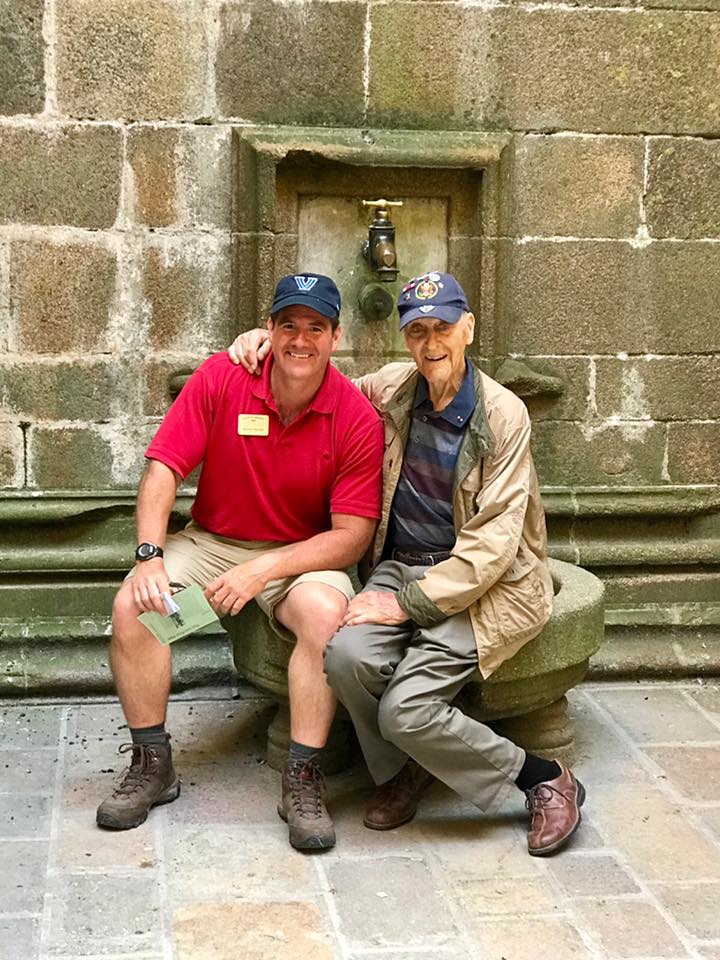 We are saddened to share the news that WWII veteran Dr. Stephen J. Weiss has passed away. We had the great honor of having Dr. Weiss travel with us several times and even led a few tours himself.

Dr. Weiss served as a first scout in a rifle squad in the 36th Infantry Division in Italy, France, and Germany during WWII. He landed on D-Day in Southern France. Listed as Missing In Action in France, he served with the French Resistance and an OSS Operational Group behind enemy lines.

For these exploits, he was awarded the French Resistance Medal, two Croix de Guerre, and the American Bronze Star. President Jacques Chirac presented him with the Legion d’ Honneur in 1999. On 22nd June 2007 he was made an Officier de la Leigon d’ Honneur and in July 2013 he was promoted to Commandeur of the Légion d’honneur. The Order is the highest decoration in France.

He was a dear friend of historian Kevin Hymel (that’s Kevin and Steve in the photo above). As Kevin said, “When Dr. Weiss attended my Patton Tour of Europe, I constantly looked to him as an expert, making sure I got his nod whenever I finished one of my lectures to the tour group. As a professor of Military History, and World War II veteran who had been all over Europe, I greatly valued his input and approval. The man was a walking history book of the war–and a fun person to travel with.”

We are writing to inform you that sadly our beloved Dr. Stephen J. Weiss has passed away in his flat in London last week. His death comes on the heels of a beautiful trip to Paris where he celebrated the legacy of the OSS with a ceremony at the Arc de Triomphe. A final trip that is both iconic and poetic knowing the history of his relationship with France. A compilation of photos from the ceremony can be found here (keep a box of tissues at the ready).

We will be holding a celebration of life for Dr. Weiss in the coming months and will keep you all informed with further details. On behalf of his family, thank you immensely for your enduring friendship with Steve. Your love and support over the years undoubtedly fueled his passion for living and his never-ending curiosity.

We leave you with an excerpt from a recent email from Steve upon finding a copy of the MIA telegram his parents received during the war:

“When I think of writing about this episode, I’m startled as to how close I came to death, to my own demise and oblivion. My sergeant lies dead in a foreign field for the 75 years I’ve survived, haphazardly thinking things over. His life and others like him remain heartbreakingly young forever. Cheated out of what I gained. Twist of Fate, Luck hanging by a thread, and Realities defiance, all combined to savour my survival, while accidentally side-stepping out of ‘harm’s way.’  Blessed are the people, French and American, military and civilian, who did everything to save my life.  When I returned to duty, those who knew celebrated my return to duty, older and wiser, but more anxious. A resounding, ‘Thank you! Reality requires additional personal attention!”

The Family of Dr. Weiss

Dr. Stephen J. Weiss served as a first scout in an 36th Infantry Division infantry rifle squad in Italy, France, and Germany during WWII. He landed on D-Day in Southern France. Listed as Missing In Action in France, he served with the French Resistance and an OSS Operational Group behind enemy lines.

He also worked as a licensed California clinical psychotherapist in Los Angeles. As a former photographer and music editor, he spent many years in American network broadcast television, particularly with CBS. In his lectures, he brings his war experiences directly into the class room.

Dr Weiss is conducting research on and assessment of Post Traumatic Stress Disorder in a select group of World War Two Veterans. The Canadian landings in Normandy on D-Day is another project under investigation. His research interests include World War Two, Psychology of the Fighting Man, The Soldier and Military Psychiatry, Experience of War, Reality and Mythology of War and Hollywood at War.

Dr. Weiss has written several books. His most recent book, Second Chance, recently revised and known as ’The Invisible Scars of War’: In Combat with the US ‘Texas’ Infantry, the OSS, and the French Resistance during the Liberation of France, 1943-1946, was published in September 2011 by Military History Publishing. Just published, ‘Allies In Conflict.’

His adolescent years spent as a first scout in an American infantry rifle squad, shaped the rest of Stephen’s life. Suffering from Post Traumatic Stress Disorder as it is now recognized, he has struggled to integrate back into civilian life. His later training as a clinical psychologist and his War studies and research on assessment of PTSD give him a greater understanding of the psychology of warfare.

Dr. Stephen Weiss states, “My generation is disappearing at an accelerated rate, and I, with all humility, remain almost alone to present and explain the life of the combat soldier. I believe that after a lifetime of researching and writing, a realistic story of the fighting man has emerged.”