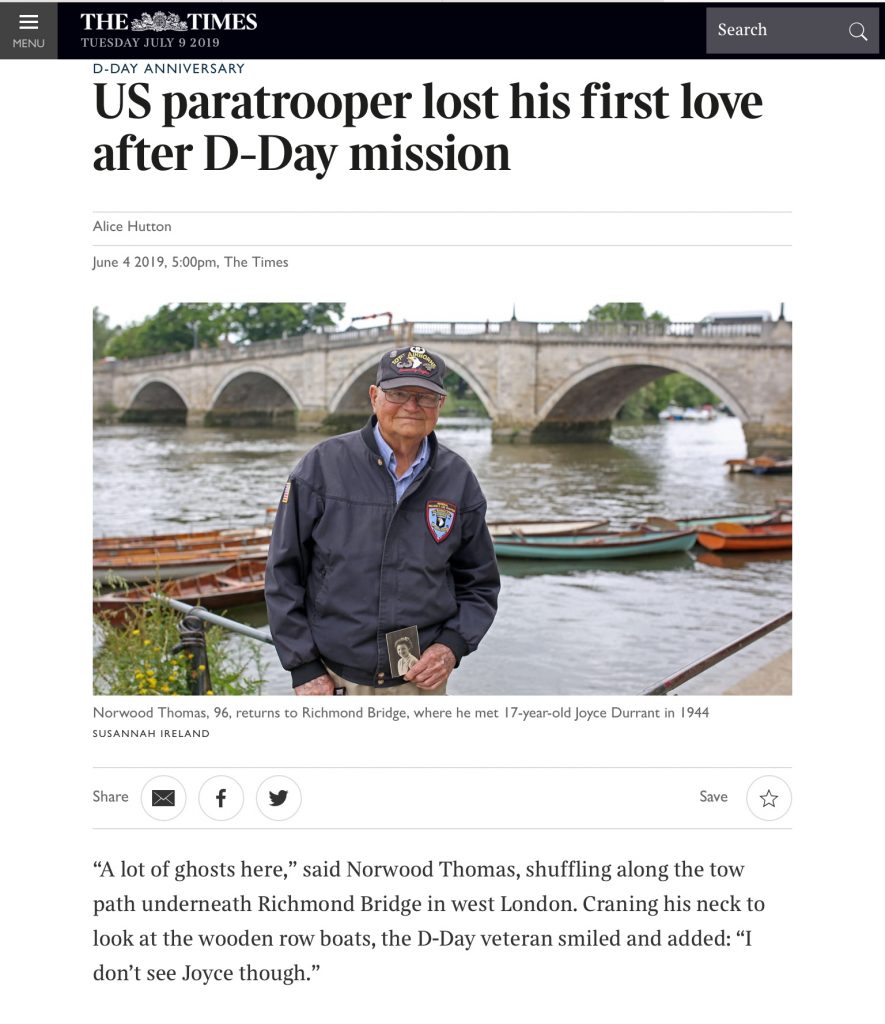 Norwood Thomas, 96, returns to Richmond Bridge, where he met 17-year-old Joyce Durrant in 1944 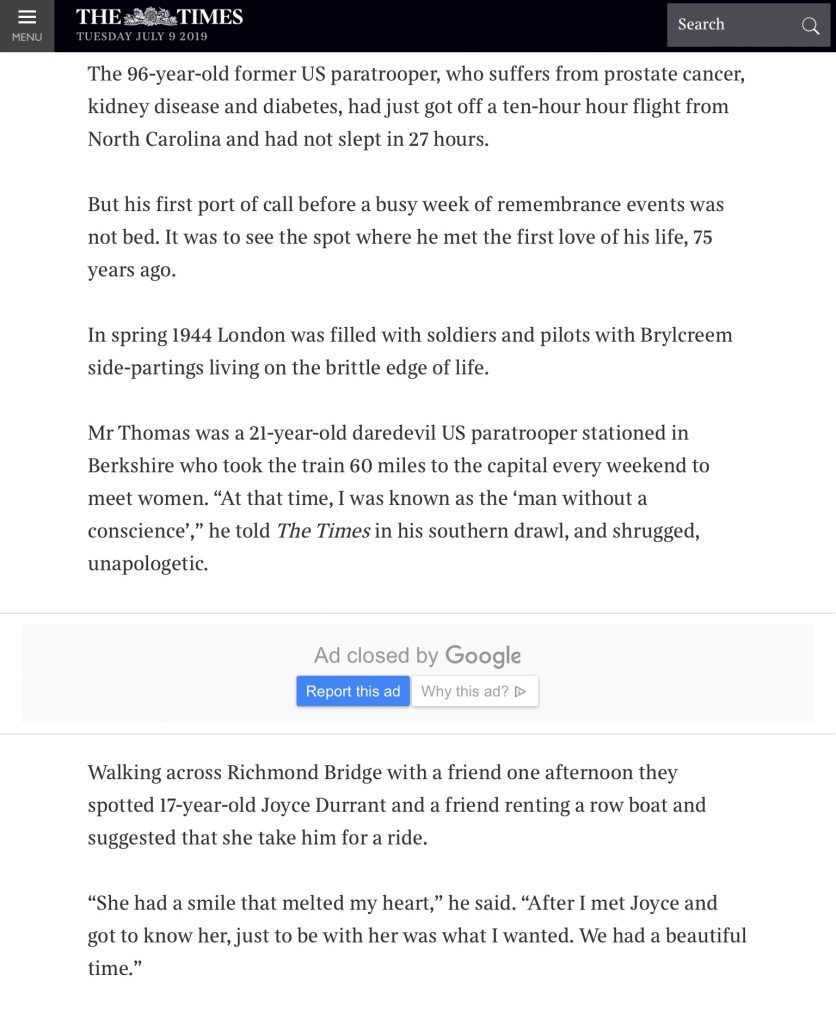 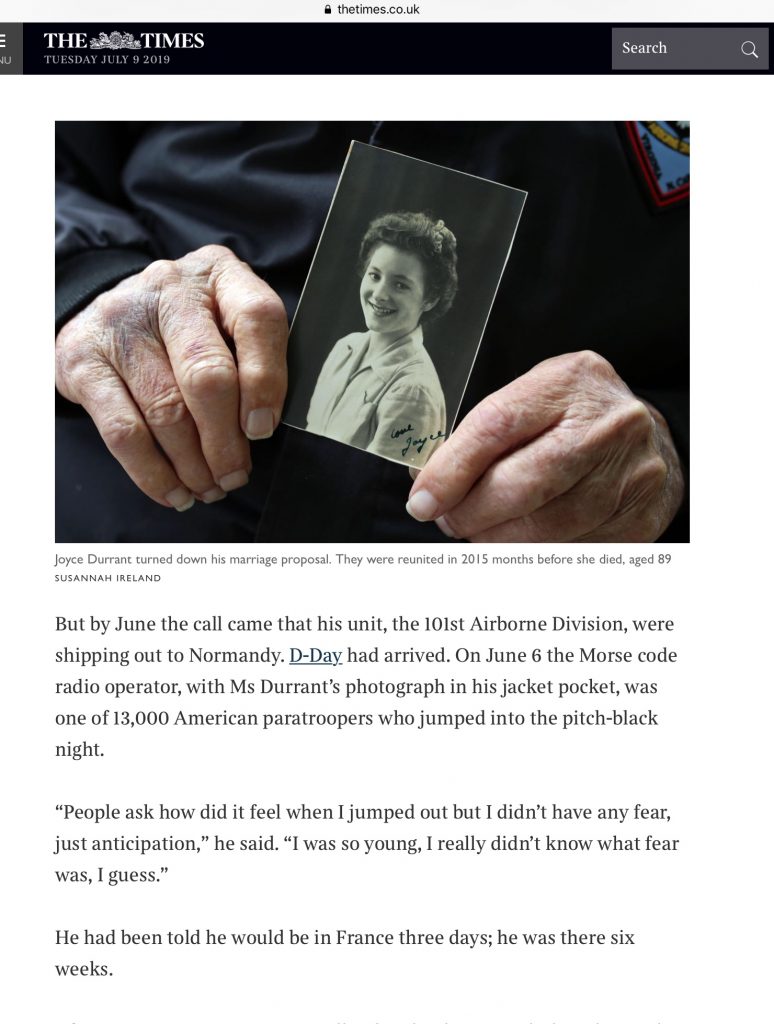 Joyce Durrant turned down his marriage proposal. They were reunited in 2015 months before she died, aged 89 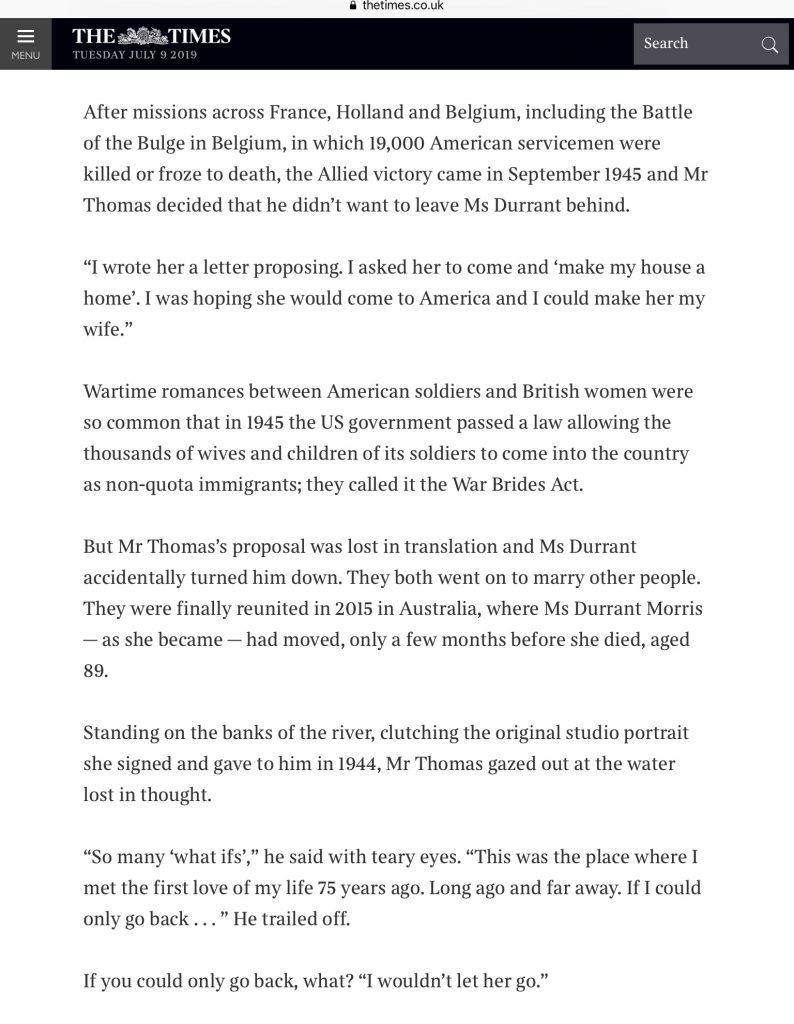 If only I could go back.

We recently received a note from Steve Thomas, the son of WWII veteran, Norwood Thomas, about a lovely article that was published about his dad in The Times of London. Norwood was a paratrooper with the 101st Airborne Division. He landed near La Fiere Bridge on D-Day and fought across Europe with the 101st in the towns of Carentan, Bastogne, Hagenau, and Berchtesgaden. You can read our tribute to Norwood here.

We were honored to have Norwood and Steve travel with us to Normandy for the 75th Anniversary of D-Day commemorations. Today, we are delighted to share the note and article, “US paratrooper lost his first love after D-Day mission,” with you.

There is a link to the article on The Times website below, but we have also included photos Steve took of the article since there is the newspaper has a paywall and you may not be able to read it online.

Note from Steve Thomas about his father’s return to London

The one thing dad wanted to do before we set off on our 75th Anniversary of D-Day Tour with Stephen Ambrose Historical Tours was to return to the very spot in England where he first met Joyce, his first love. Hopefully, many of you know the story about dad and Joyce’s first meeting. It just so happens that before our departure for the U.K. I was contacted by The Times newspaper, wanting to do a follow up from the story that went viral almost four years earlier about dad and Joyce. The reporter knew back then we would be returning for the Normandy 75th anniversary events. Talking with him on the phone I mentioned that we would be in London and planned to go back to the bridge in Richmond Surrey were in the works.

Not missing an opportunity, a reporter from The Times was there with us that afternoon revisiting the very spot 75 years later. The reporter sent to meet with us was Alice Hutton along with a photographer who covered the event. The story was posted four days later (the day of our ferry ride to Cherbourg) in the paper.

I hope you will enjoy it as much as we have. Dad with a teary eye was speechless after reading it. It’s hard to hide emotions that run so deep from a time the world was in turmoil.

US paratrooper lost his first love after D-Day mission

“A lot of ghosts here,” said Norwood Thomas, shuffling along the tow path underneath Richmond Bridge in west London. Craning his neck to look at the wooden row boats, the D-Day veteran smiled and added: “I don’t see Joyce though.”

The 96-year-old former US paratrooper, who suffers from prostate cancer, kidney disease and diabetes, had just got off a ten-hour hour flight from North Carolina and had not slept in 27 hours.

But his first port of call before a busy week of remembrance events was not bed. It was to see the spot where he met the first love of his life, 75 years ago.

Read US paratrooper lost his first love after D-Day mission >>

We actually did a Valentine’s Day post about the love story between Norwood and Joyce when the story went viral years ago. In case you missed it, you can read it here.