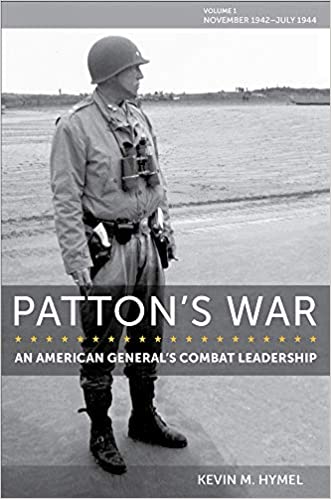 During his life, George S. Patton Jr. starred as an Olympic athlete in the 1912 Stockholm games, chased down Mexican bandits, and led tanks into battle in World War I. But he is best remembered for his exploits on the field of battle in World War II. Patton’s War, the first of two volumes, follows the general from the beaches of Morocco to the fields of France, right before the birth of Third Army on the continent.

In highly engaging fashion, Hymel uncovers new facts and challenges long-held beliefs about the mercurial Patton, not only examining his relationships with his superiors and fellow generals and colonels, but also with the soldiers of all ranks whom he led. Through extensive research of soldiers’ memoirs and interviews, Hymel adds a new dimension to the telling of Patton’s WWII story.

Read a sample of Patton’s War >

Buy Your Copy of Patton’s War

Kevin’s book is now available for pre-order on Amazon and other retail outlets. Based on an early review, you’ll want to order your copy now!

“Kevin Hymel has established himself as our leading expert on America’s favorite general. Deeply researched and well crafted, a must for readers of military history.”

—Mitchell Yockelson, author of The Paratrooper Generals: Matthew Ridgway, Maxwell Taylor and the American Airborne from D-Day through Normandy

Purchase your copy of Patton’s War on Amazon >

Travel with Kevin on the In Patton’s Footsteps Tour

Our 2022 In Patton’s Footsteps Tour provides a special opportunity to travel with Patton expert Kevin Hymel. You will visit the sites and battlefields significant to Patton’s Third Army, including Normandy, Brittany, Mont-St-Michel, the battlegrounds of Falaise Pocket, the German border, and the Battle of the Bulge. Along the way, Kevin will share his insights and knowledge on how this maverick general helped win the war in Europe.

Travel with Kevin on the In Patton’s Footsteps Tour >