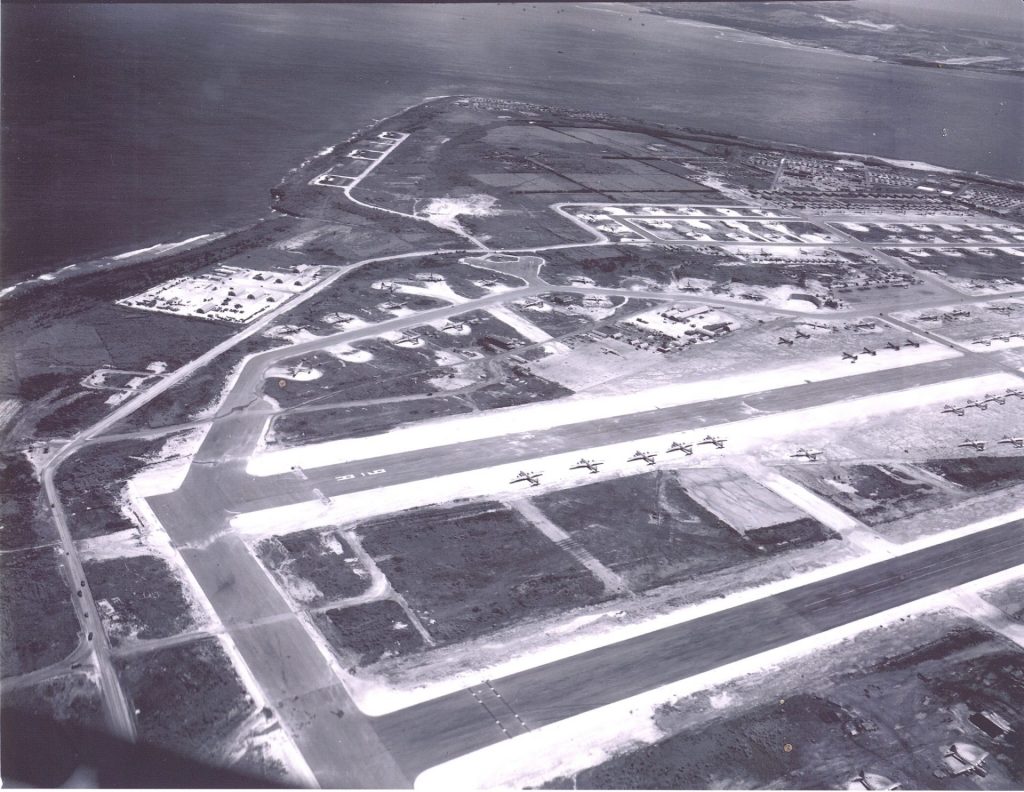 Tinian and The Bomb by our historian Don A. Farrell chronicles the important and often overlooked role Tinian in the Mariana Islands played in the atomic bombing of Japan at the end of World War II. As part of the Manhattan Project, Project Alberta and Operation Centerboard, Tinian was integral in the plan to drop atomic bombs on Japan.

Following is an excerpt from Chapter 3, “Building Manhattan West,” as well as more information about Don’s fascinating book.

Commodore Paul J. Halloran, commander of the Seabees on Tinian was a native of New York.  He named all the streets and places on the island after those on Manhattan, his hometown. The Seabees nicknamed the island “Tinmanhat,” while the people at Los Alamos referred to it as “Manhattan West.” 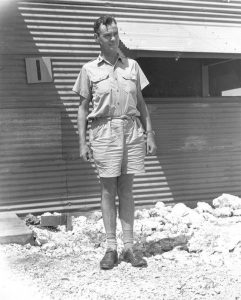 75 years ago on Friday morning, March 31, Colonel Elmer E. Kirkpatrick, Jr. (CEC), U.S.A. Corps of Engineers, arrived on the Pacific island of Guam wearing USA Air Forces patches to disguise his real mission. Even though the invasion of Okinawa was only days away, he carried “Top Priority” orders for Fleet Admiral Chester W. Nimitz from Admiral Ernest J. King, Commander-in-Chief, U.S. Navy, with a copy for Major General Curtis E. LeMay, commanding officer, 20th Air Force, to be hand-delivered by Kirkpatrick. After meeting with Nimitz’s key staff, LeMay borrowed a B-29 on April 3 and personally escorted Kirkpatrick to Tinian, stopping briefly at Saipan to have lunch with Brigadier General Emmet O’Donnell of the 73rd Wing.

Brigadier General Frederick von Harten Kimble, 7th Air Force, Tinian Island Commander, was on hand to greet the general and his guest. Driving past hundreds of B-29s parked and in action on North Field, they drove south to Island Command headquarters on East 46th Street, just off Broadway, where Kirkpatrick revealed his orders to Kimble. Actually, it was only his cover story. He related that the Air Force was in the process of developing a block-buster, like the British 22,000-pound Grand Slam bomb. The American bomb was a bit smaller and designed to fit into a B-29. The test run against Japan from the base on Tinian and they needed construction support to build three bomb assembly buildings. Two were to be bomb loading pits, the other was to be a secure compound for receiving parts which were then sorted, stored, pre-assembled and modified if necessary.

Because Kirkpatrick carried top priority orders from Guam that gave his project the highest priority over all other construction projects (except hospitals), Kimble turned to the Island Construction Officer, Captain, Paul J. Halloran, (CEC) USN, the “head Seabee” on Tinian, who assigned the 67th Naval Construction Battalion to the project. The 67th was already working on North Field and could perform the tasks Kirkpatrick requested.

Seeing that Kirkpatrick was a fellow airman, Kimble offered Kirkpatrick a room in his headquarters. Considering Tinian was a combat zone, his headquarters was the equivalent of staying in a five-star hotel. Kirkpatrick accepted Kimble’s offer, and set out to find 67th headquarters. He knew there was no time to waste. The 509th Composite Bombardment Group was due to arrive the first of June, with fifteen specially designed B-29 Superfortresses.

The reality is that Kirkpatrick was building a forward base for America’s first nuclear strike force. Major General Leslie Groves, Commanding Officer, Manhattan Project, had entrusted him with this key mission, and he was determined to make it happen. 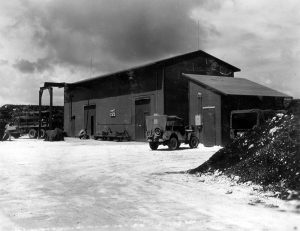 What most people do not know is that what Kirkpatrick was building was a production line for atomic bombs. As he understood the situation from Dr. J. Robert Oppenheimer’s perspective, Little Boy, a uranium-based, gun-type bomb would not be tested. They were confident it would go off, and so would be dropped at the earliest possible moment, hoping it would be sufficient to convince the Japanese that surrender was their only option. The first step would be to put the device together, and they would do this in Assembly Building No. 1, while Fat Man, plutonium-based, implosion-type bombs would be assembled in buildings 2 and 3.

Most analysts felt that the Japanese would not surrender after Little Boy. If that were to be the case, America was prepared to drop as many Fat Man bombs as necessary to force Japan to surrender. Considering that some of the gadgets inside the bomb had not been tested, they would have to conduct the tests on Tinian. Therefore, the plan was to ship enough parts to build fifty Fat Man bombs, beginning in assembly buildings No. 2 and 3, then resume back at No. 1 after Little Boy was expended.

Considering that the 58th Bomb Wing was due in from China in April and all twelve battalions of Seabees on Tinian were busy, the fact that Elmer Kirkpatrick and the 67th Seabees were able to have everything in place by the time the first Superfortress from the 509th was ready to fly its first practice mission to Japan was quite an accomplishment.

Tinian and The Bomb

Tinian and The Bomb: Project Alberta and Operation Centerboard by Don A. Farrell chronicles the important and often overlooked role Tinian in the Mariana Islands played in the atomic bombing of Japan at the end of World War II. As part of the Manhattan Project, Project Alberta and Operation Centerboard, Tinian was integral in the plan to drop atomic bombs on Japan. The book captures this history as gathered from documents and images held in the National Archives, Record Group 77. The book documents how the Army Corps of Engineers, guided by the Los Alamos Laboratory in cooperation with the US Army Air Forces and the US Navy and its Seabees, constructed facilitates on Tinian capable of assembling and delivering as many atomic bombs as necessary to bring WWII to a successful end without an invasion of the Japanese home islands. As predicted, two atomic bombs, one uranium and one plutonium, were launched from Tinian and dropped in rapid succession, resulting in the unconditional surrender of Japanese military forces. This prevented the political partition of Japan (as happened with Korea and Germany) and led to the US-Japan security alliance that remains the cornerstone of peace in the Pacific today. Tinian and the Bomb is fully illustrated and available in hardcover.

Purchase Tinian and The Bomb on Amazon>>