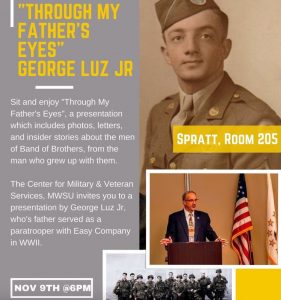 George Luz, Jr. was recently interviewed on radio station KNIM in Kansas City, Missouri, about his dad George Luz, Sr. and fellow members of Easy Company. He was in town to give his “Through My Father’s Eyes” presentation at the Center for Military & Veterans Services at Missouri Western State University. The presentation includes photographs, stories and personal letters along with some rare audio of the men who were depicted in Stephen E. Ambrose’s book, Band of Brothers, from the man who grew up with them.

George joined Don and Holly, hosts of the Breakfast Club on KNIM Country, to talk about the legendary 2nd Battalion, 506th Parachute Infantry Regiment of the 101st Airborne Division.

Listen to his fascinating interview > 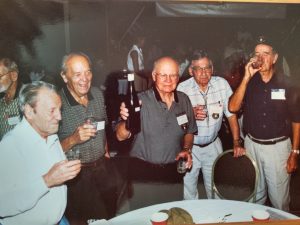 George has been attending Band of Brothers reunions since 1965. In his article, “Band of Brothers Reunions: A Toast to the Fallen, A Forging of Bonds,” he shares his memories of these yearly events that brought together the men of Easy Company, and later their families, every year since 1946.